This is the first edition of forest clippings and links. Here I will aim to gather relevant and interesting forest- and forestry related news, research articles, event announcements etc. Please leave a comment if you found something interesting or would like something featured and I will do my best to publish it.

How did the bear abundance in Slovenia and Croatia change during the past 20 years?

This very relevant piece of research was recently published by Slovenian brown bear researchers: “The results show that the abundance of the bear population in the Dinarics during the past 20 years has increased most of the time. The average annual nett bear population growth in Slovenia was 4.5% and in Croatia 5.0%. Estimated bear population before the annual harvest in springs 1998 and 2018 was 405 (330-460) and 975 (875-1130) bears respectively, which indicates a 2.5-fold increase of the population size in a 20-year time period.“

A report on the PEFC Slovenia annual photo competition that took place this year under the theme: “Feel the forest, experience PEFC”. Mushroom gatherers will understand why the winning photo feels so right. 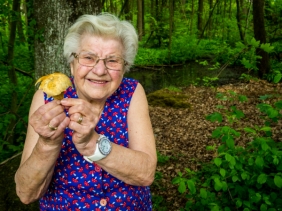 “Seedling survival was strongly influenced by fencing, and differences in survival between silvicultural treatments were minimal when fencing was employed. Fertilization had minimal effects overall, only increasing the probability that unfenced seedlings were in competitive positions relative to surrounding vegetation. We suggest that underplanting oak seedlings can augment natural reproduction, but the practice should be accompanied by a combination of midstory removal and fencing, at a minimum, for adequate growth and survival.”

From the IUFRO website: “This free 5-week online course is open to everyone around the world. For the first time the teaching is available in Spanish as well as English. Understand how climate change, biodiversity loss and deforestation affect people, exploring justice in environment management. Hear from activists around the world, and share your own experiences with other learners from many different backgrounds. Start date and duration: 15 October 2019; 5 weeks”